This paper is part of a wider publication project that seeks to unsettle the politics of time that has fastened the anticolonial enterprise to the past. Along with my co-editor, Carlos Garrido Castellano, we propose to mobilise and repurpose anticolonial aesthetics and praxis as an ongoing radical creative repertoire with the potential to shape our global contemporaneity. My contribution focuses on a particular national example, that of Algeria and begins with the observation that in the wake of Algeria’s ‘black decade’ of violence in 1990s, references to a star (or nedjma in Arabic) came to be inscribed and contextualised within a diverse range of novels and artistic production. Its function varies but seems in every case to prompt a reflection on Algeria’s revolutionary past and its uncertain present. A range of novelists draw upon the symbolic power of the star and its centrality to a symbolic condensation of the nation and its revolutionary struggle given form by Kateb Yacine in his novel Nedjma (1956) published during the Algerian war of independence (1954-62). In juxtaposing these two periods – the one anticolonial and the other post-colonial – we can reflect on how the aesthetics and creative processes of the earlier period are reworked in order to prompt agency. In this way, such novels suggest that anticolonial aesthetics can serve not only to think about decolonization but about the failures, if not the failure, of the post-colonial state. At the same time, the post-colonial state continues to draw upon that same symbolic reservoir to reassert its political legitimacy and to pacify a radical collective project. How writers and artists rework, resist or appropriate the aesthetics of Algeria’s revolution, creating a dialectic of past and present is central to this paper but also to the recent popular movement, or hirak, what has brought the question of aesthetics and revolutionary temporalities back into the public space.

Please find out more on our upcoming conference on crime fiction:

NOIR IN THE NORTH

It is with great sadness that we announce the death of Professor Michael Sheringham, who died peacefully at home on Thursday, 21 January 2016. He was Lecturer, Senior Lecturer and Professor of French Literature at the University of Kent from 1974 to 1995, and Professor of French at Royal Holloway, University of London from 1995 to 2004, before his appointment to the Marshal Foch Chair of French Literature at the University of Oxford where he was a fellow of All Souls College from 2004 until his retirement in 2015. Michael Sheringham made a profound impact on the field of modern French literature and culture with works on French autobiography, everyday life, and a wide range of contributions on modern and contemporary poetry and prose fiction, Surrealism, and most recently on memory and the archive. Selected publications include Everyday Life: Theories and Practices from Surrealism to the Present, 2006 and French Autobiography: Devices and desires. Rousseau to Perec, 1993. He was a constant source of encouragement and inspiration to our Centre for Studies in Memory and Literature and was happy to serve on the board of directors. We offer our sincere condolences to his family and friends. 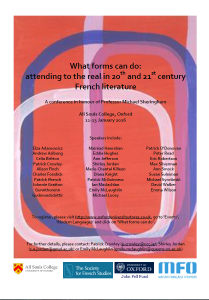 What forms can do: Attending to the real in 20th and 21st century French literature

One of the most widely used concepts in the current vast and interdisciplinary field of memory studies is that of collective memory, which goes back to Maurice Halbwachs, whose thesis consists in that personal memory is always inscribed into, and is understood from, collective or group memory. Through a critical discussion and close reading of Halbwachs’ works and with reference to the distinction between memory and recollection, I argue for the introduction of the concept of collective recollection as the process of the reasoned and critical reconstruction of the past through a joint effort of a social or political group.

—
Dmitri Nikulin is professor of philosophy at The New School for Social Research in New York. He has written  on ancient and modern philosophy, philosophy and history of science, philosophy og imagination and dialogue among other things. His most recent works are The Other Plato (SUNY Press, 2012) and Dialectic and Dialogue (Stanford, 2010).

Noir in the North

The Killing, Wallander, The Girl with the Dragon Tattoo, Miss Smilla’s Sense of Snow – Nordic Noir has been a dominant part of global detective fiction, film and television in the past two decades. But what are the parameters of this genre, both historically and geographically? What is noirish and what is northern about Nordic Noir? This conference invites proposals which either investigate the specifics of noir in a particular text or which interrogate more broadly the notion of Nordic Noir.

Can Nordic Noir be used to identify, for example, some aspects of the work of other Nordic authors, such as Halldór Laxness, Isak Dinesen or Vilhem Moberg? What is the relationship between earlier Scandinavian crime fiction, such as that by Maj Sjöwall and Per Wahlöö, and Nordic Noir? How does work like the Shetland novels by Ann Cleeves fit within the parameters of Nordic Noir? What part has translation played in the history and global circulation of Nordic Noir?

More broadly, the conference will address the following questions: How does Nordic Noir challenge the traditional critical histories of noir? What new genealogies of noir can complicate the Anglo-American dominance of noir? Are there geographical limitations to noir and how does it function transnationally? Where does the north begin for noir? What are the peripheral boundaries in the East and West? Does noir complicate traditional literary histories modeled on geographical boundaries? What specific images of the north are associated with Nordic Noir? How do sex and gender operate in Nordic Noir? What is Nordic noir’s relationship with particular national pasts, identities, or collective and cultural memory? What connections are there, for example, between Nordic Noir and Continental existentialism, European Romanticisms, or fin-de-siècle literatures?

This major international conference will consolidate work to date on Nordic Noir and seek to deepen our understanding of the genre, both in relation to traditional histories, but also in drawing on new theoretical and geographical understandings.

The Crime Studies Network, in collaboration with the Centre for Studies in Memory and Literature at the University of Iceland and with the University of Newcastle, will host Noir in the North in Reykjavik in November 2016. This conference is held in conjunction with the Iceland Noir Crime Fiction Festival (17-19 November).

Individual proposals for 20-minute papers/3 x 20 minute paper panels are invited. We welcome proposals on novels, films, television series, graphic novels and other forms. Send a short title, a 250-word proposal, and a 100-word biographical note to noirinthenorth@gmail.com by 15 November 2015. Applicants will be notified of acceptance by 15 January 2016.

The Trouble with Memory II

The Middle Ages I:

Gísli Sigurðsson, The Árni Magnússon Institute : Memory of Ireland in the different versions of the Book of Settlement

Ásdís Magnúsdóttir, University of Iceland: Time and Memory in the Saga of Grettir

Ciaran McDonough, National University of Ireland, Galway: “Acht do bhrígh go bhfuaras scríobhtha i sein-leabhraibh iad” (“Because I found them in some old books”): Medieval Memories and Nationalist Intentions in Nineteenth-Century Irish Antiquarianism

Sveinn Yngvi Egilsson, University of Iceland: Landscape and memory: Some points of comparisons between two modern poets in Ireland and Iceland

Eilis Almquist: The Power of the Heartfelt Curse. A Medieval Folktale of Protest, with some reflections on its relevance to contemporary Ireland (and Iceland?)

Sharae Deckard, University College Dublin: Memory and the Market: Financialization, Irrealist Aesthetics, and the “Boom” Novel in Ireland and Iceland

Anne Fogarty, University College Dublin: “The usual inner throb in me”: Reading Trauma and Memory in Eimear McBride’s A Girl is a Half-Formed Thing (2013)

John Brannigan, University College Dublin: ‘In this corner of peace in a world of trouble’: Literary Representations of Neutrality, War, and Occupation in the Islands of the North-East Atlantic in the Second World War

Daisy Neijmann, University of Iceland: Hidden People – Hidden Crimes: Memories of the Allied Occupation in the Fiction of Arnaldur Indriðason

Travel and Round Table Discussion

Sumarliði Ísleifsson, Reykjavík Academy: „Their huts are very much like the Irish“, John Barrow in Iceland 1835

The Trouble with Memory (II)
The Ireland-Iceland Memory Studies Network will host four panels at the Humanities Conference, University of Iceland on 13-14 March 2015. The panels will focus on Irish and Icelandic issues with special emphasis on memory and memorialisation. Subject areas will build on thematic strands that emerged from our last meeting in Dublin, May 2014, and include a) Medieval memory; b) Memory and crisis; c) Memory and landscape; d) Islands and war. Papers are invited which deal with one or more of the above issues, either from a comparative perspective or with an emphasis on one of the two countries. Please send a short abstract (max 250 words) to Gunnthorunn Gudmundsdottir (gunnth@hi.is) and Fionnuala Dillane (fionnuala.dillane@ucd.ie) by 1 December 2014. Applicants will be notified by 15 December. 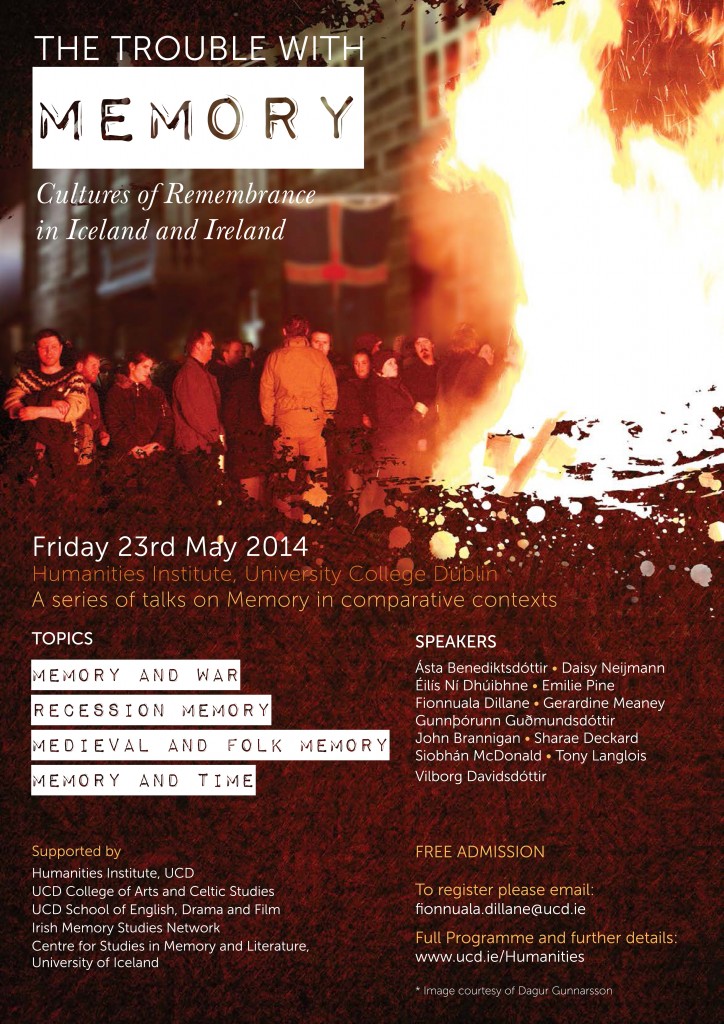